One of the great things about eCommerce is the opportunity to tap a much larger, potentially global, market.

But tapping the global market means contending with, and understanding, a diverse range of factors.

These factors influence the popularity and prevalence of eCommerce in particular markets. For example, some countries may have very favourable regulations, tax and customs practices, logistics and financial infrastructure and levels of income.

Others may have high levels of technology adoption and a preference for buying on mobile devices (mobile commerce).

Others still may rely heavily on the opinions and thoughts of family and friends, emphasising the importance of social commerce.

While we understand that considering all of these factors can be overwhelming, we found a couple of reports last week that might help you better understand at least some of the intricacies of the global eCommerce market.

China takes the top spot on the A.T. Kearny index, with a score of 84 (out of 100, the higher the score, the more potential a country has in online retail). The report predicts:

China’s online retail market will explode over the next five years, thanks to infrastructure improvements, increased internet access for rural regions, rising wealth, and consumers’ growing predisposition to spend. 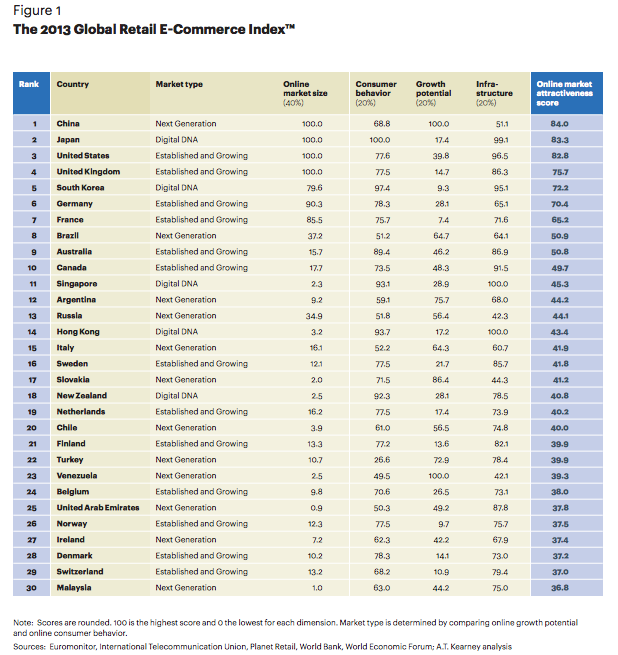 Some people may be surprised by the high rankings of non-OECD countries like Argentina (12), Russia (13), Venezuela (23), United Arab Emirates (25) and Malaysia (30). (Although it is worth pointing out that neither China (1) or Brazil (8) are OECD countries).

Notably, India doesn’t make it into the index, despite its 1.2 billion strong population. The report chalks this down to low internet penetration and poor financial and logistical infrastructure.

Understanding the specifics of different markets

A.T. Kearney offer some insights into particular countries. For example, Brazil is described as a “social commerce champion,” whereas Germany is “a growing online dynamo.”

The United States is the “800-pound gorilla in online retail.” This is because it has the world’s largest online retail market, advanced infrastructure, and a rich, large and dynamic consumer base that is used to buying online.

The study breaks online markets into three categories: Next Generation; Established and Growing; and Digital DNA.

Next Generation markets are primarily developing countries, which have high growth potential but lower technology adoption. China, Brazil, Argentina and Russia are in this group.

Then there are Established and Growing markets, which have well-established and yet growing and still attractive online retail markets. Success in these markets depends on innovation from eCommerce sellers. Markets in this group include the United States, United Kingdom, Germany and France.

Understanding which category of market you are operating in may help you tailor the various elements of your eCommerce experience.

For example, if you are targeting US or UK consumers, you’ll want to be thinking of new and exciting ways of doing things. On the other hand, if you are targeting customers in China and Brazil, you might want to look beyond iPhones and Androids to consider how your site looks on more affordable mobile devices.

The second report we found was a Nielsen study called eCommerce: Evolution or Revolution in the Fast-Moving Consumer Goods World?. Nielsen surveyed 30,000 online consumers in 60 countries (because of the online nature of the survey, the perspectives are of existing internet users, and may not represent the views of the total population).

The key findings from this report include:

The most popular categories for eCommerce include non-consumables, durables and entertainment-related products. Growing categories include e-books, event tickets, sporting goods and toys.

While the online market for buying groceries and other consumables is smaller than the market for durables and entertainment-related products, it is beginning to show promise. This is something we’ve definitely seen in the WooCommerce space, with great sites like Farm Truck Organics and Groceries, Hatchery and The Feed.

One of my favourite things in these Nielsen reports is the internet penetration tables included in the back. For this report, you’ll find it on page 19.

The table shows internet penetration for the many countries included in the study, broken up by region. It’s really fascinating stuff.

Similarly Brazil, which was ranked 8th by A.T. Kearney, has only 46% internet penetration.

What these statistics say to me is that the eCommerce boom in certain emerging markets is only just getting started.

If you are, or aspire to be, selling in any of the countries mentioned above, you may want to check out these reports (Report 1, Report 2).

Consumers are a complicated bunch, and it’s hard enough to keep on top of the behaviours and preferences of different age cohorts within the one market, let alone across multiple countries and cultures.

But—through a bit of research and reading—you can get a better handle on the global eCommerce marketplace.

With global B2C eCommerce sales predicted to hit $1.5 trillion in 2014, that research may just prove to be worth the effort. 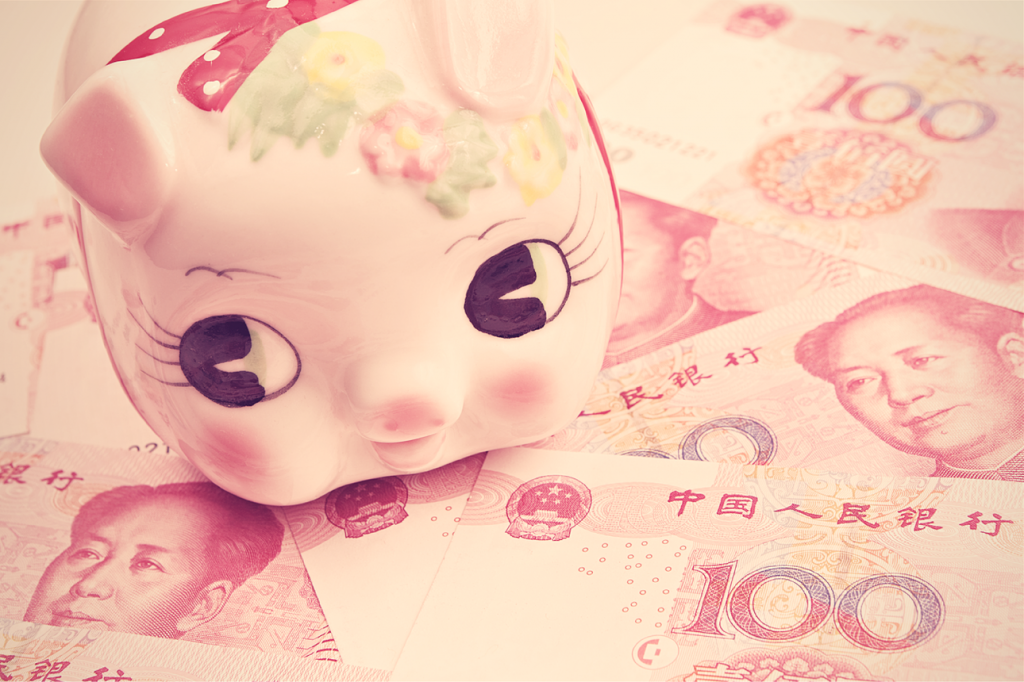