Gabor is a former software engineer at Prospress. He lives around Oxford, UK, and is one of the co-organisers of the WooCommerce London meetup. You might occasionally find him talking at and attending events. Polyglot. 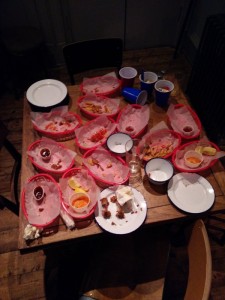 This meetup! This meetup was a perfect storm! It was brilliant! It ended up being brilliant, despite all the things that went wrong at the beginning. Our story begins the day before…

On Sunday evening, Elliot discovered that he couldn’t make the meetup, but he introduced me to his contact at WP Engine so we could iron out details of the event. So far, so good. Meanwhile Marina had a series of unfortunate events, and can’t attend either. I’m a massive introvert, so organising an entire event by myself was always going to be ‘fun’. But I thought, “Okay, I can do this”. I headed to the pub (The Blacksmith and the Toffee Maker, absolutely awesome place, super accessible near Angel, which has been a tube station since 17th November 1901).

When I arrived, I found that somehow we were booked in for Wednesday so the pub wasn’t expecting us, but could still accommodate us, so no problem. Stewart, our speaker for the evening, arrived shortly after. A bit later the swag box arrived too! Things were looking up!

People slowly filtered in. We ended up being 16, and had an entire, closed off section of the place to ourselves, although the sectioning off was achieved by a curtain. Interestingly enough, a closed curtain doesn’t keep people out all the time. The pub catered finger food which was a tad messy, but very very delicious.

A lot of interesting conversations took place, and there are always new faces around, so we’re getting traction! Yay! I’m incredibly proud of the fact that there are people who go to other ecommerce events as well: magento is another prominent theme of the events. Note to self: I should probably start attending those as well.

Getting plugins to play nicely with each other

Stewart had a very interesting and developer focused talk about a project he took part in when working with Union. They rebuilt the site for The Footpath Fund, a charity that needed its site overhauled, as well as needing a way to collect donations. There were a few plugins used, among them One Page Checkout, which is a Prospress production.

He talked about the different ways the plugins would work together, and how they wouldn’t most times. We saw examples of code they used to achieve the things they wanted the plugins to do, and taught us that sometimes faking things is just as effective as doing the actual things.

Let me expand on that, as it’s not intended for general advice (or any, at all). The example he used was a selection of prices to donate: £10, £30, £50 or a custom amount. In reality, the form just took one value: a custom price, so even if you selected the £10 option, it had the same underlying functionality as if you’ve written “10” in the custom box. The selections were there to make choice easier for visitors, and acted as anchors for suggested donation amounts.

There were a lot of nuggets of wisdom in his talk. One of the primary reasons to use plugins is that plugins have already done the bulk of the work. In that case it’s down to site owners and their developers to truly configure and customize the functionality.

Stewart also expanded on the need to keep an eye on plugins. Because there’s no central place that has vetted plugins, there is a risk of ending up with malicious code / bad functionality. There’s really no good answer on how to guard against that besides keeping an eye on them and vetting them yourself. With some of the larger plugins, you can be confident that they will do what they intend to (for example, Gravity Forms, Yoast SEO, WooCommerce and some of the extensions to WooCommerce sold through them), but of course, bugs are still a possibility.

"How do you screen the plugins that you use?" – brilliant question. "Keep an eye on them." @stewartritchie #woocommldn

All in all it was a great event. An added bonus was that we managed to get the amount of refreshments pretty much on point, which is incredibly hard to do when organising for a variable number of people.

I was the last to go, being the organiser, so I got to watch all attendees talk, make new connections, form new ideas and get some answers on hosting with WP Engine. Quite a few of us had some experience with that, and the case studies they provided also helped.

Kudos to @stewartritchie for sharing at last night's London meetup, and to @wpengine (sponsors) and @javorszky 🙂 pic.twitter.com/TJKk3jBCGJ

Again, thank you to all the attendees, Stewart for the talk, WP Engine for providing the refreshments and The Blacksmith and Toffee Maker for the awesome venue. I do have to mention they had a pretty sweet projector with HDMI in, which made life so easy!

We will skip the December WooCommerce meetup due to Christmas and end of year happenings, and we’ll be back in January. 🙂