Tony Cosentino might just be a small-business branding genius.

His business name—The Bearded Roaster—is fun and entirely memorable. The way Tony tells it, he came up with the name rather effortlessly.

Tony had a similar experience when naming his WordPress consulting business, The WordPress Guy. In both cases, it was what people had naturally started calling him anyway.

Along with his natural talent for simple, yet effective branding, Tony is taking advantage of some other very clever business ideas. These include an Australia Post shipping hack, and deftly seizing an opportunity to get his coffee in front of customers. 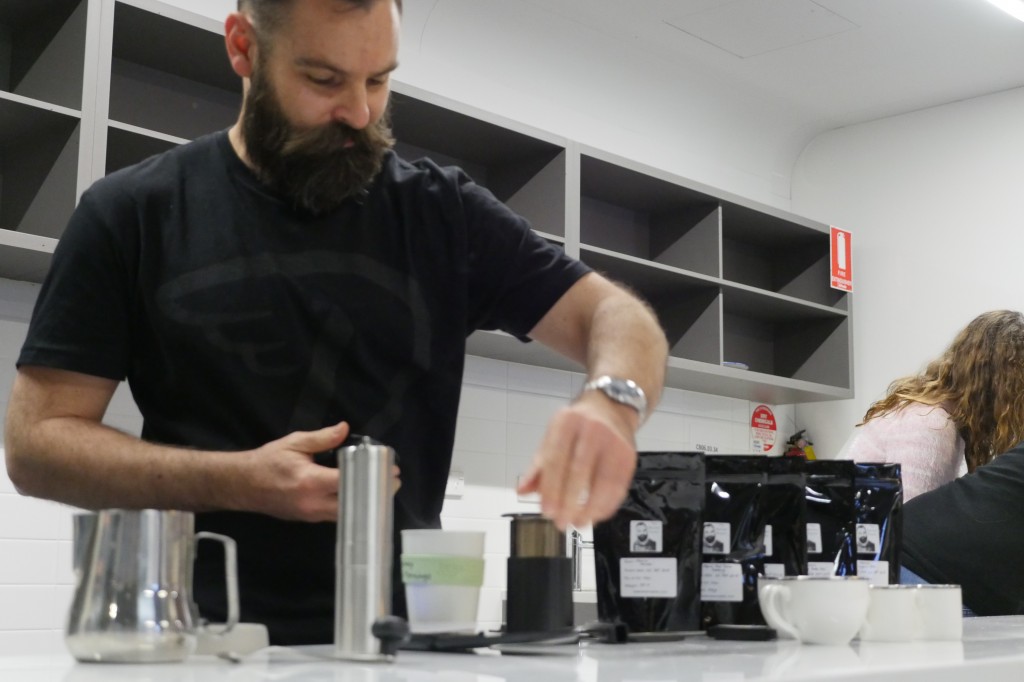 Tony started roasting his own coffee as a hobby. One day he was in Sydney’s SteamTank Coffee (an “excellent hole in the wall coffee shop”). Tony was talking to the barista and mentioned that he’d roasted some beans, which he had with him.

The barista was impressed with what he tasted. So he offered to sell some of Tony’s beans to SteamTank Coffee customers.

Tony says that the confidence boost he received from this experience is what prompted him to start The Bearded Roaster business:

That prompted me to kind of think well if someone is going to put my beans in their shop, if it’s only even for a week, I want to take that opportunity to promote it.

Tony found his suppliers through a good old-fashioned Google search. He needed green bean suppliers that would sell in small quantities.

It was a bit challenging to find a supplier that sold good quality green beans at the right price, but in the end Tony found three suppliers. He selects the beans himself, based on his own tastes and preferences:

If I really like the coffee, well that’s the coffee that I’ll sell. I won’t really want to sell things that I don’t love the taste of and I’ll always be pursuing new flavours. [I can] hopefully communicate that through the website, so that I find other people that want to do the same thing with their coffee drinking.

For now, Tony is ordering smaller quantities of beans, and using an iterative approach to expanding his bean offerings.

I can’t go crazy with stocking myself with every bean under the sun because then you have beans getting old, sitting around you know, if you’re not turning them over.

All of The Bearded Roaster’s design is simple and DIY, yet—at least in my view—is quite effective.

Tony says that the simplicity was necessary, due to the fact that he had to set the business up so quickly.

He created The Bearded Roaster logo (a sketch of his face) using an app, and currently uses simple black bags for shipping and storing the coffee. (Tony is currently in the process of updating the logo and coffee bags—customers should see these in the next few weeks). 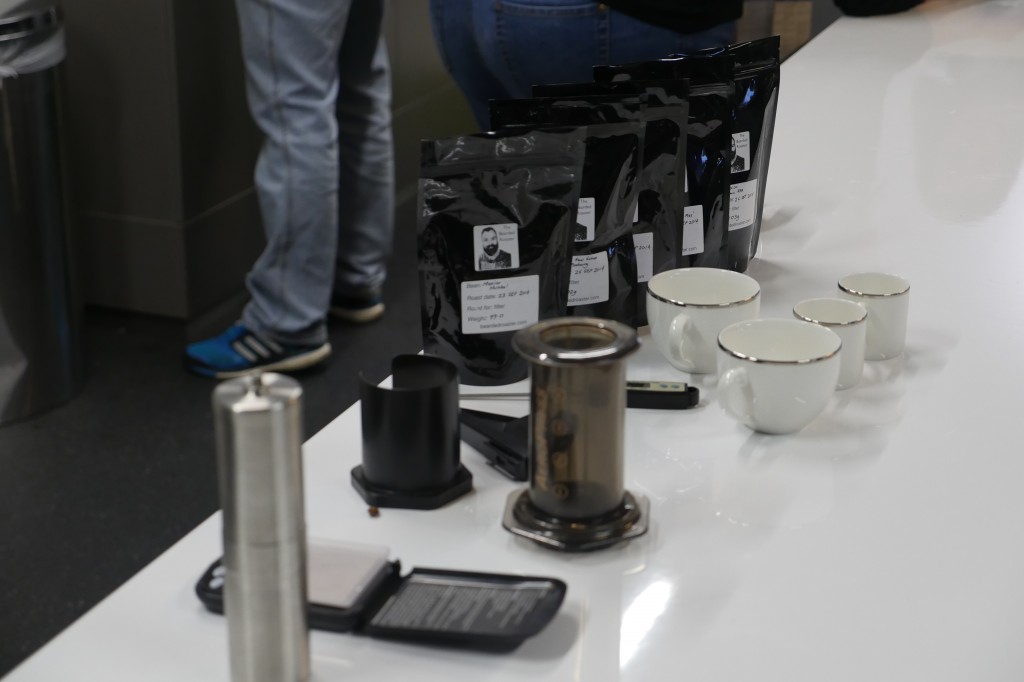 The Bearded Roaster is a great example of how you can produce a simple yet effective brand when you are starting out, especially if you need to take advantage of a finite window of opportunity. You can always iterate later, as Tony is doing now.

I asked Tony how much he had to learn about coffee when he decided to start The Bearded Roaster. He replied:

It was just a great hobby I guess, and I was learning…I realised that roasting your own coffee is a far cheaper way to drink coffee. To drink good coffee. And once I started roasting my own coffee I realised that I could remove the sugar, remove the milk. And get back to bare coffee. Because it’s just a far better tasting coffee.

He learned how to build his own roaster and how to roast the coffee. He says that part was the biggest learning curve, because it’s easy to either over roast or under roast a coffee bean.

Tony says he talks to “coffee people” whenever he can. He’s also got a few books by Scott Rao about coffee roasting and alternatives to espresso, including the book Everything But Espresso (pdf).

He also learns from forums, including the aptly titled coffeesnobs.com.au.

During the interview I discovered that Tony has done something really clever with his shipping.

He designed his coffee bags to be the perfect dimensions and weight to qualify for standard letter postage in Australia. This means that he can offer flat rate, very affordable, shipping and handling to anywhere in Australia.

That could be to Darwin, Tasmania, Perth, like, anywhere. I put every remote locality I could think of into the postage calculator as a standard letter. And it kept coming up with the same price.

Tony thinks that this clever little shipping hack might help him gain market share in regional and remote areas of Australia.

I haven’t really targeted yet, but I think the remote locations might end up being my market. Like it’s all well and good if you live in Sydney or Melbourne and you can literally walk to a coffee roaster and buy some coffee. But if you live in Townsville or Mackay, or kind of more remote areas, it’s not going to be that easy.

Tony chose WooCommerce for The Bearded Roaster because of his background as a WordPress consultant.

In the early days, Tony wasn’t sure which eCommerce option would be the best option WordPress. But these days, Tony says choosing WooCommerce is “a bit of a no brainer,” because “WooCommerce just came in got the code sorted out.”

While The Bearded Roaster doesn’t currently offer subscriptions, that’s something Tony is considering for the future.

People that just want to have a regular flow of coffee arriving on their doorstep… Other coffee roasters do it. They normally have a bag of coffee every two weeks or something like that. But—because I’ve got a smaller sized bag—I’d be going for even more consistent, more regular subscriptions, like weekly.

Tony has two pieces of advice for entrepreneurs.

He recommends that entrepreneurs do their homework first about their shipping and postage options. Because of his experience as a WordPress consultant, Tony knew that researching and setting up shipping can be one of the hardest parts of running an eCommerce business.

Tony’s second piece of advice is to make sure you have some customers first.

So what’s in store for the future for The Bearded Roaster?

Tony says he’s going to take things slow and justify his growth. So rather than spending large amounts of money on bigger equipment to roast more coffee, he’s going to wait until he has the demand to justify that.

I’m not trying to get too far ahead of myself.

His goal is to get to a level where The Bearded Roaster is his full-time business, where he makes enough to support his family financially, and where he’s able to travel to source high quality beans, like many of the traditional coffee roasters do.

Tony is just getting started with The Bearded Roaster.

I think it’s particularly great that he launched the business so quickly, taking advantage of a confidence-boosting opportunity to get his product in front of customers. It just shows that with a bit of guts, forethought and software, you can start a business extraordinarily fast.

There’s not necessarily any need to wait until you can afford expensive design work or roasting equipment.

The Bearded Roaster’s DIY branding and unique take on product size and shipping are both examples of simple, yet effective, ways for small and new businesses to differentiate themselves from the pack.

And the coffee?.. Well as I alluded to last week, it’s bloody delicious!