One of my favourite movies is “Midnight in Paris”, in which Owen Wilson plays a writer who yearns for Paris in the 1920s. He dreams of mingling with the Lost Generation, drinking with Fitzgerald and Hemingway, and partying with Dali and Picasso.

Part of the reason I love this movie is because it depicts my own fantasy of being amongst this time of exuberance and optimism, creativity and intelligence. I can only imagine what it would be like to hang out with the great minds of that era, to discuss big ideas, and to create important works of art and literature.

At the risk of totally overstating the situation and engaging in some rather overblown hyperbole, I’m going out on a limb to say that Prosparis and WordCamp Europe gave us a little insight into the joy of being young(ish), creative, innovative, and mingling with some of the best minds of our generation.

Ok, ok, if that’s too far, at least we can agree that we were certainly mixing with the best minds in our field. This still might sound like big talk, but hear me out, because I hope to explain just why Prosparis was so darn special.

First of all, Paris itself was magical, and Parisians were in a fantastic mood. I don’t know if it was because the weather was sunny and a little bit hot, or if it was because Parisians were just very happy with their new President. Whatever the cause, Paris seemed to be in the grip of the most beautiful outbreak of happiness, optimism, and friendliness I’ve ever seen in 11 years of visiting the city. It was a glorious time to be in the City of Light.

And then we brought our own magic, with the Prospress team meeting for the first time in some cases, getting to know each other, joking, working, and learning side by side. Add in our introduction of Robot Ninja to the world, and the high calibre of the speakers at WCEU. Then mix in the opportunity to hang with inspirational founders and hackers and hustlers and developers, catching up with old friends and new in Paris, and you have all the ingredients for a great meetup.

The team started to assemble in Paris from the 9th June, and by Monday 12th, almost everyone had arrived, except for Brent. So we not only had a headstart on enjoying Paris and on coworking, we all had a headstart in getting past jet lag 😉

On Tuesday 13th, over an amazing lunch of duck breast and salmon tartare at Hugo’s Bistro, Brent declared #Prosparis open and the festivities began for real.

Our first official activity was the ever-popular “round robin one-on-ones”, where the team is paired off to do four rounds of 20 minutes’ chatting. We provided suggested talking points but the floor was open for asking anything of each other. 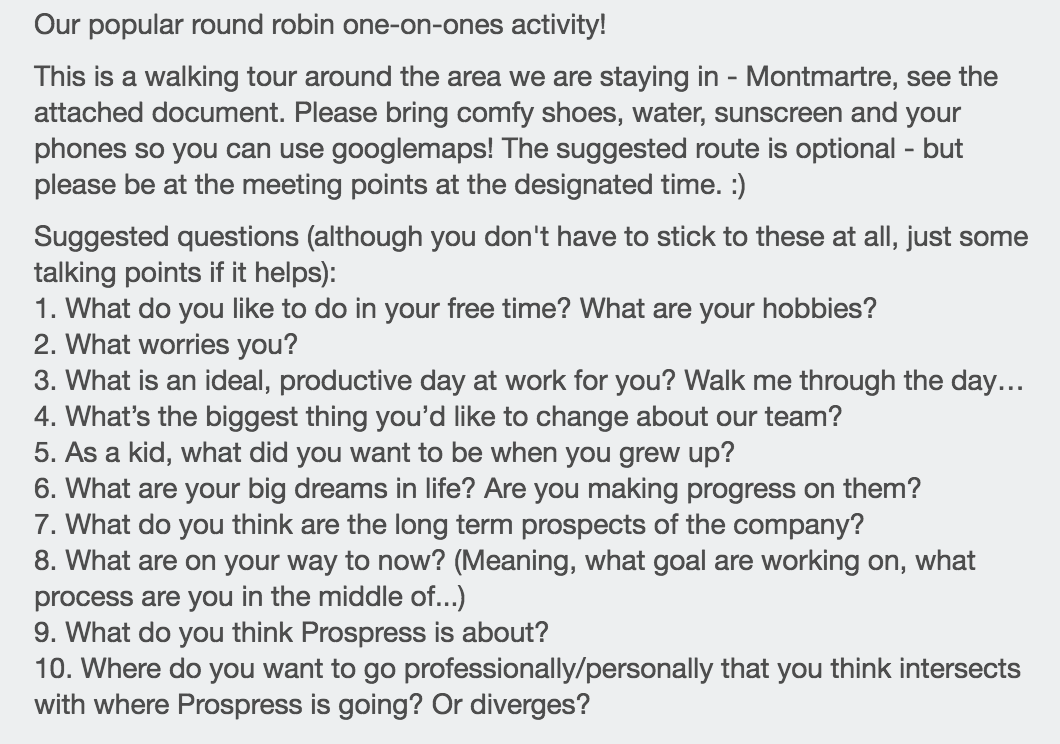 It’s always been a favourite activity, even when the team mostly knew each other, but this time was extra special with three new members and five “old hands”.

At Meetabout, we did the round-robin one-on-ones while walking through the Australian rainforest. Paris is a world away from that, but was equally amazing. Carolyn had prepared a full itinerary with photos of our meeting places, directions on how to get to each meeting place, and interesting facts about each point.

We sweated and chatted our way to Eglise de la Trinite, the Moulin Rouge, the cemitiere of Montmartre, and finally to Sacre Coeur. We then made our way back to the hotel with a bottle of champagne to hear Brent explain the coming changes to the WooCommerce marketplace. To add a little spice to the topic we played a (completely non-compulsory) drinking game: every time Brent said “support”, one half the team took a sip of their drink; when he said “Woo”, or “WooCommerce”, the other half of the team drank. 😉 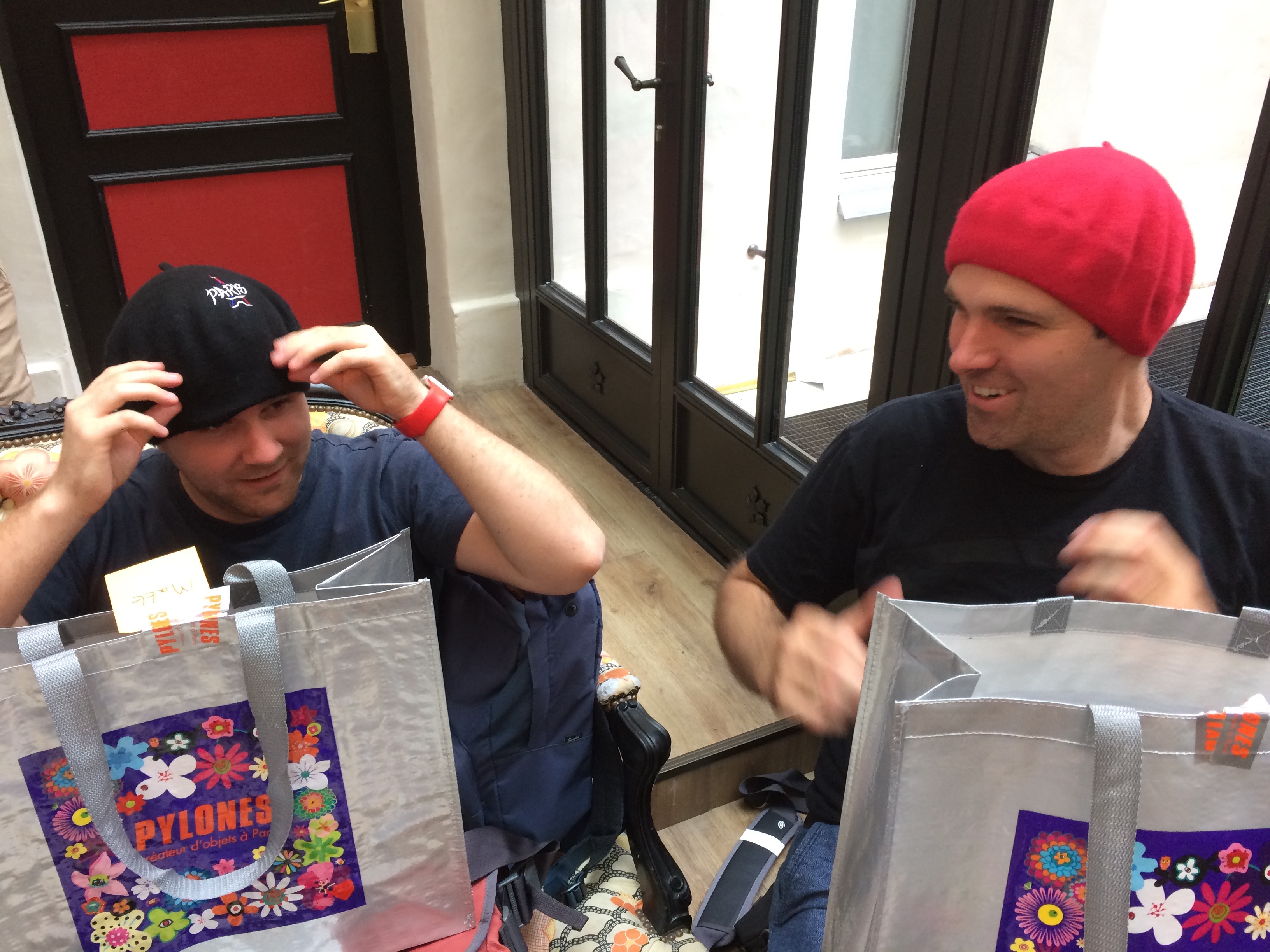 We then made it rain with swag, unveiling the Robot Ninja hoodies, and the limited edition Prosparis messenger bags designed by Nick. There were also Robot Ninja, Prospress, and Small Woorld stickers, and a bunch of Prospress shirts and hoodies flying around. Add this to the welcome bags prepared by Carolyn, and suddenly it was like Christmas in June, in Paris.

On Wednesday morning we headed to WeWork Lafayette, which despite being under construction and sans air conditioning, was still a highly luxurious coworking space. We might have suffered a bit of heatstroke during our work day, but we enjoyed and envied the amazing coffee machine; the water machine dispensing free, cold, still, and sparkling water; the lounges; and the facilities. The only problem is that now that we have seen the palace of coworking spaces, we are reluctant to go back to our stables 😉

The first order of business (as usual) was to clear the support queue. Then Matt gave a presentation on “Enter the Ninja” about Robot Ninja, what it can do, what he and Jason are working on, and what’s coming. Even though we’ve been hearing about this project at SCRUMs, it’s fair to say that Matt’s presentation blew our socks off. 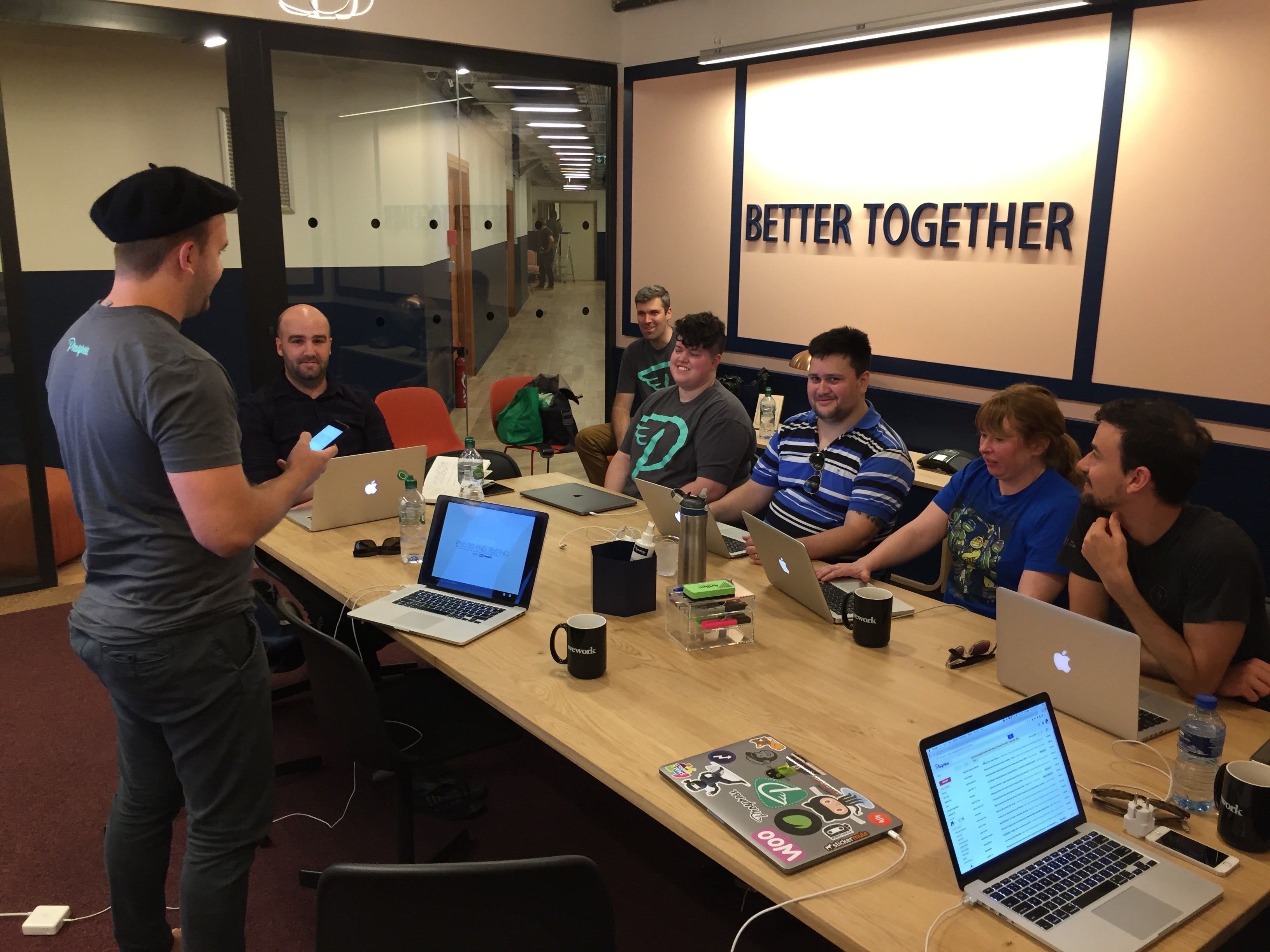 Next, César delivered followup excitement by explaining the global logger he’s working on, which will help the team proactively identify problems and trends in support tickets. Originally called “Captain’s Log”, it looks as though it will be named “Tricorder” after some brainstorming during the session … because it knows everything that’s going on.

Lauren led a session on “The Subscriptions Maze Map”. Her cleverly designed workshop resulted in an overview of how Subscriptions works from the user perspective through to a highly specific flow chart of how renewals are triggered.

Brent talked about “Subscriptions, oh the places you’ve been”, taking us on a trip that traced Subscriptions history from the beginning through to current day. He prefaced his whole presentation by explaining that he wanted to cover not the success of Subscriptions, but how he found “55 ways not to build a Subscriptions extension for WooCommerce”. Brent hoped that his radical honesty about the mistakes on this journey would encourage us to feel more comfortable with experimenting to see if something works, rather than being afraid of failure. 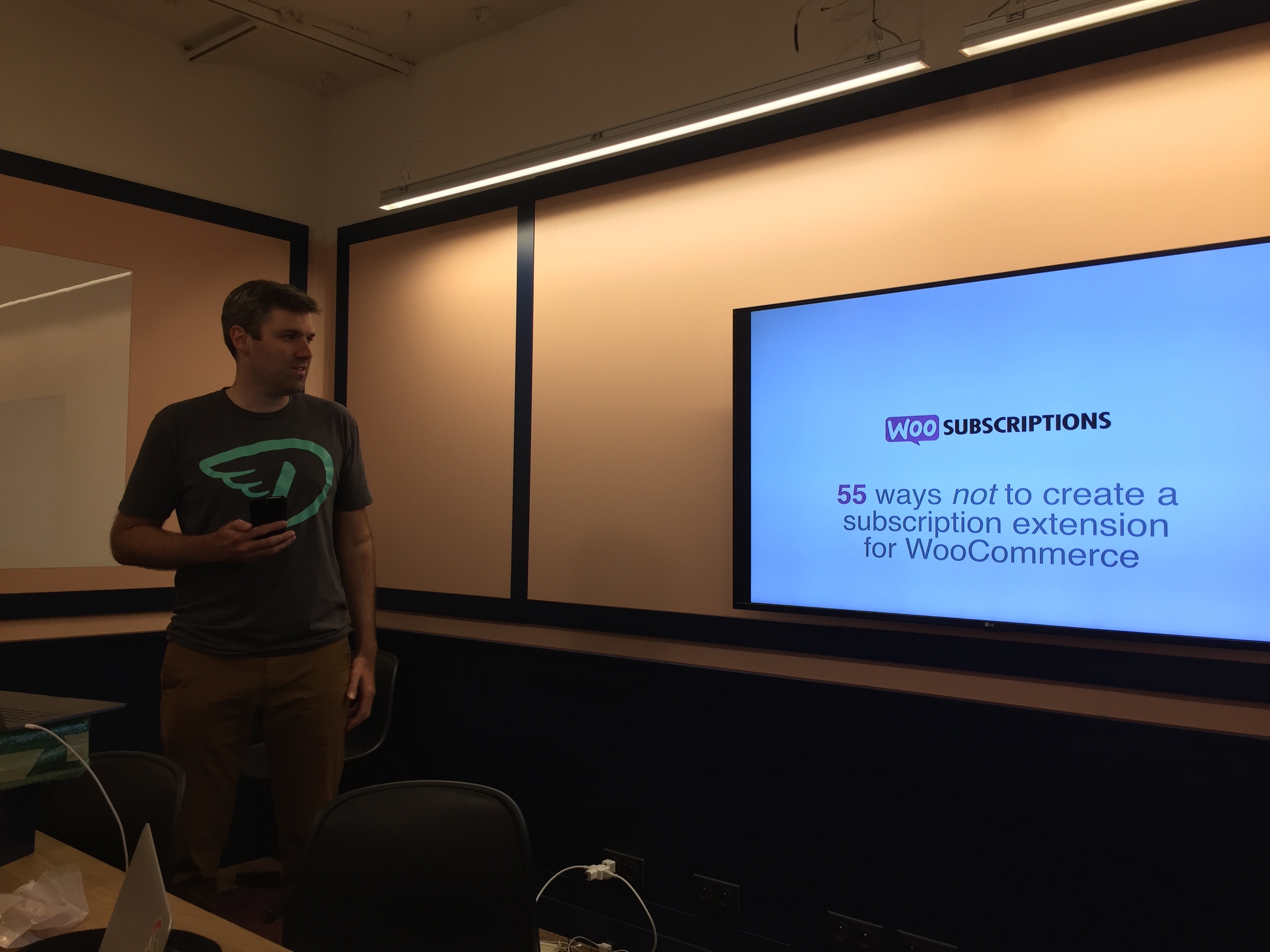 James’ talk on “Subscriptions, oh the places you’ll go” gave us a sneak peek into what’s coming in future for Subscriptions: in short, there are lots of exciting features planned for our flagship product!

After working inside all day, we made our way to the Eiffel Tower for a picnic complete with baguettes, champagne, cheese, red wine, macarons, AND berets. The team chatted about the presentations we’d had that day while watching the sun set behind la Tour Eiffel. Not a bad way to cap off a long day! 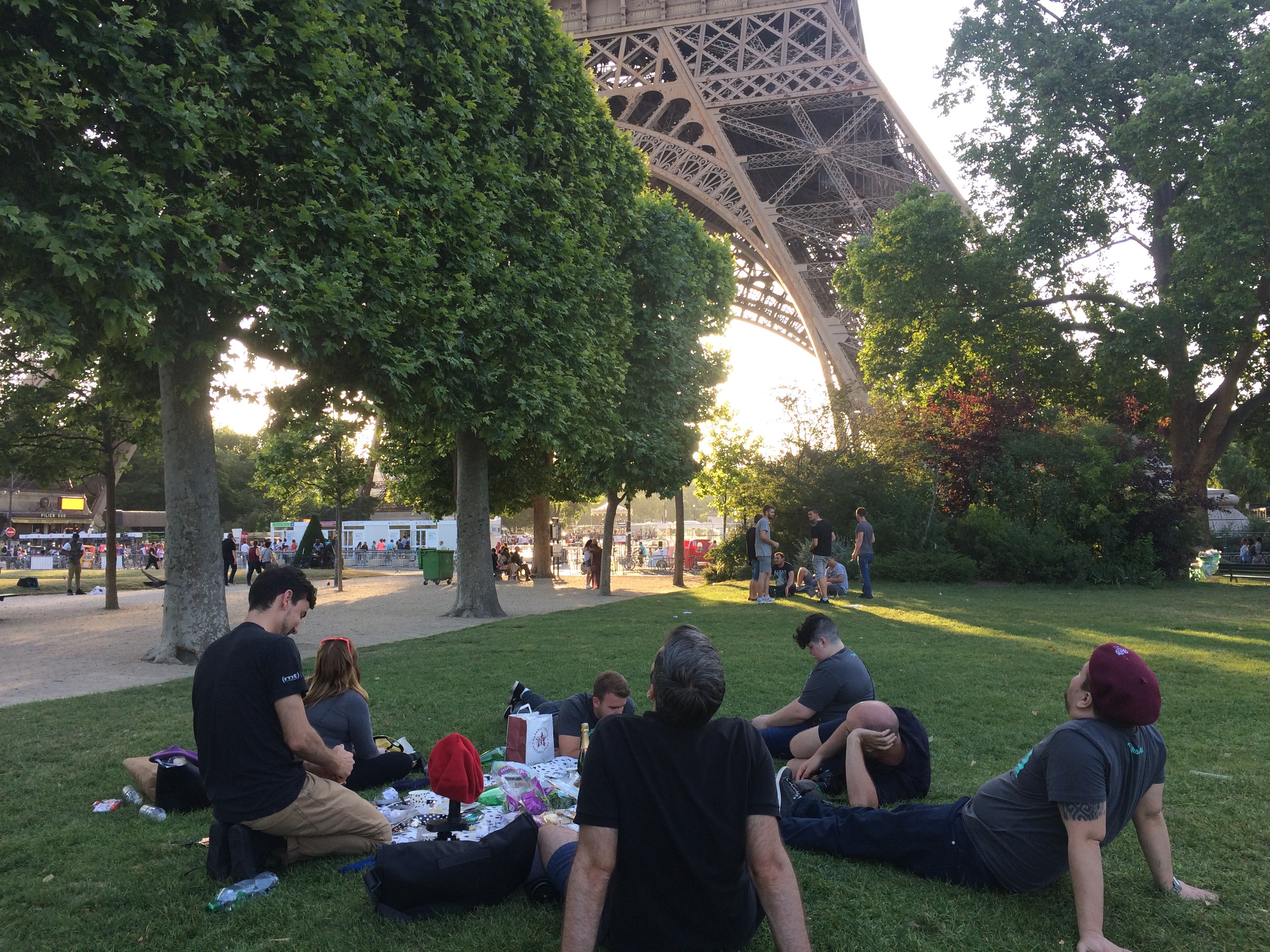 On Thursday we spent another day at WeWork, again starting off by coworking and clearing the support queue. I then gave an overview of the elements of Peopleware Engineering at Prospress, focusing on the history of the hiring process and how it has evolved with our different hiring rounds and vacancies.

Next up, Nick gave his first presentation at his first meetup! He managed to be hilarious while talking about an important topic. He facilitated a round table on support, how we can manage it, what sort of positive experiences have we had in support in the past, and how can we learn from these for delivering support ourselves.

I then did a session designed to elicit the Prospress core purpose and core values. This session was heavily based (i.e. forked) on a session SkyVerge did at a recent meetup. Beka had been kind enough to share it with me.

We came up with some interesting values but discovered a slippery slope when we gazed into our navels for too long and ended up defining ourselves as flying punk monkeys (not even joking). I guess this is what happens with too little sleep and too much sun .

Thursday evening was spent on a boat tour on the Seine. We enjoyed a decent dinner while watching the sights and lights of Paris roll past the windows. We arrived at the Eiffel Tower just in time to see it sparkling at 10pm, much to the delight and wonderment of everyone on board. 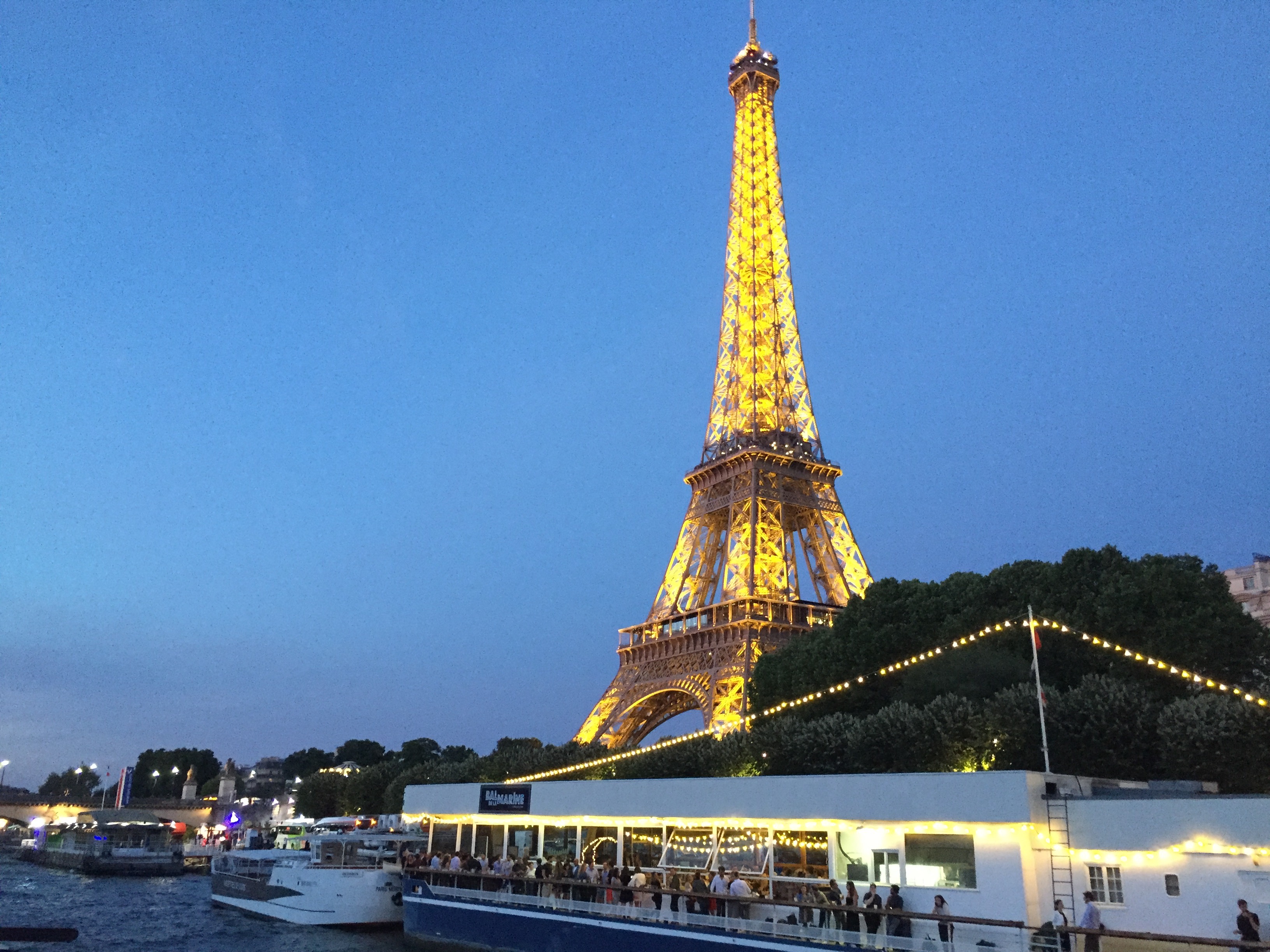 Friday and Saturday were spent at WCEU, which I have wrapped up separately. That post is coming soon.

After a very full and tiring week, we slept through breakfast on Sunday and most of us convened for a lunch full of good life choices, which naturally included creme brûlée.

We then moved along to the markets at Puces de St Ouen, which completely blew our minds. The majesty of the goods on offer in the fine antique section kept us entranced for way too long in the afternoon heat. It also managed to turn a bunch of basically non-materialistic people into highly acquisitive folks yearning for a castle to fill with chandeliers and chaise lounges. 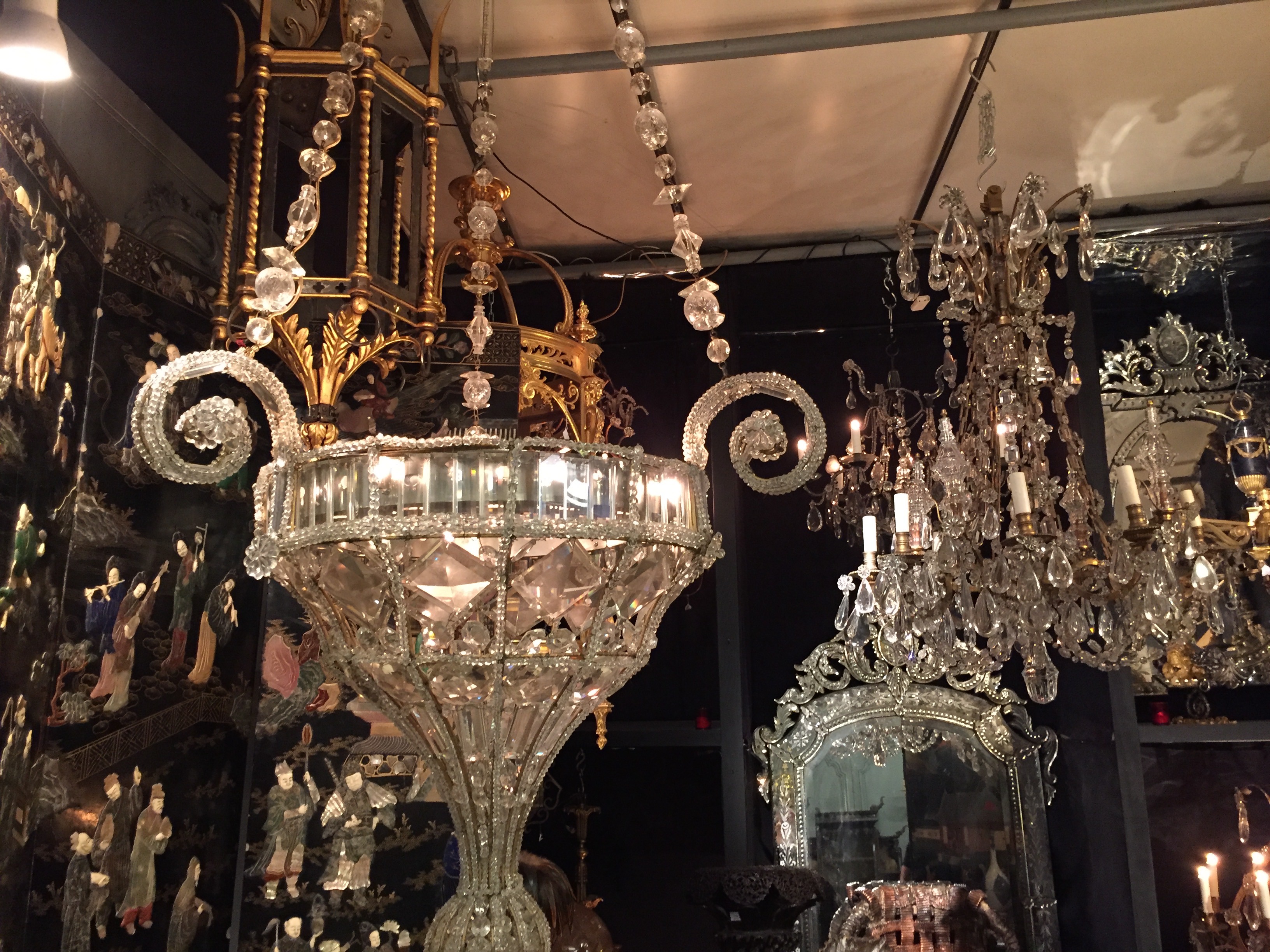 Our final dinner for the Prosparis meetup took place in an old carriage from the Orient Express. We celebrated the last day of Prosparis, as well as an early birthday party for Subscriptions (on 21 June) and for Prospress as a company (1 July). It’s hard to believe it has only been 3 years since launching Prospress, and it’s hard to believe it has already been 3 years since this post.

And we finally did Carolyn’s final interview as a group, which at that point was less powersuit and more tiramisu. We managed to ask some tricky questions before we finished dessert and were very happy to welcome her to the team. This was another milestone for Prospress: our first “in person” interview!

After dinner, we handed out one last piece of swag: the birthday celebration posters we’d ordered from commits.io. These were created by printing Subscriptions code, and superimposing the Prospress flying P in darker print on top. 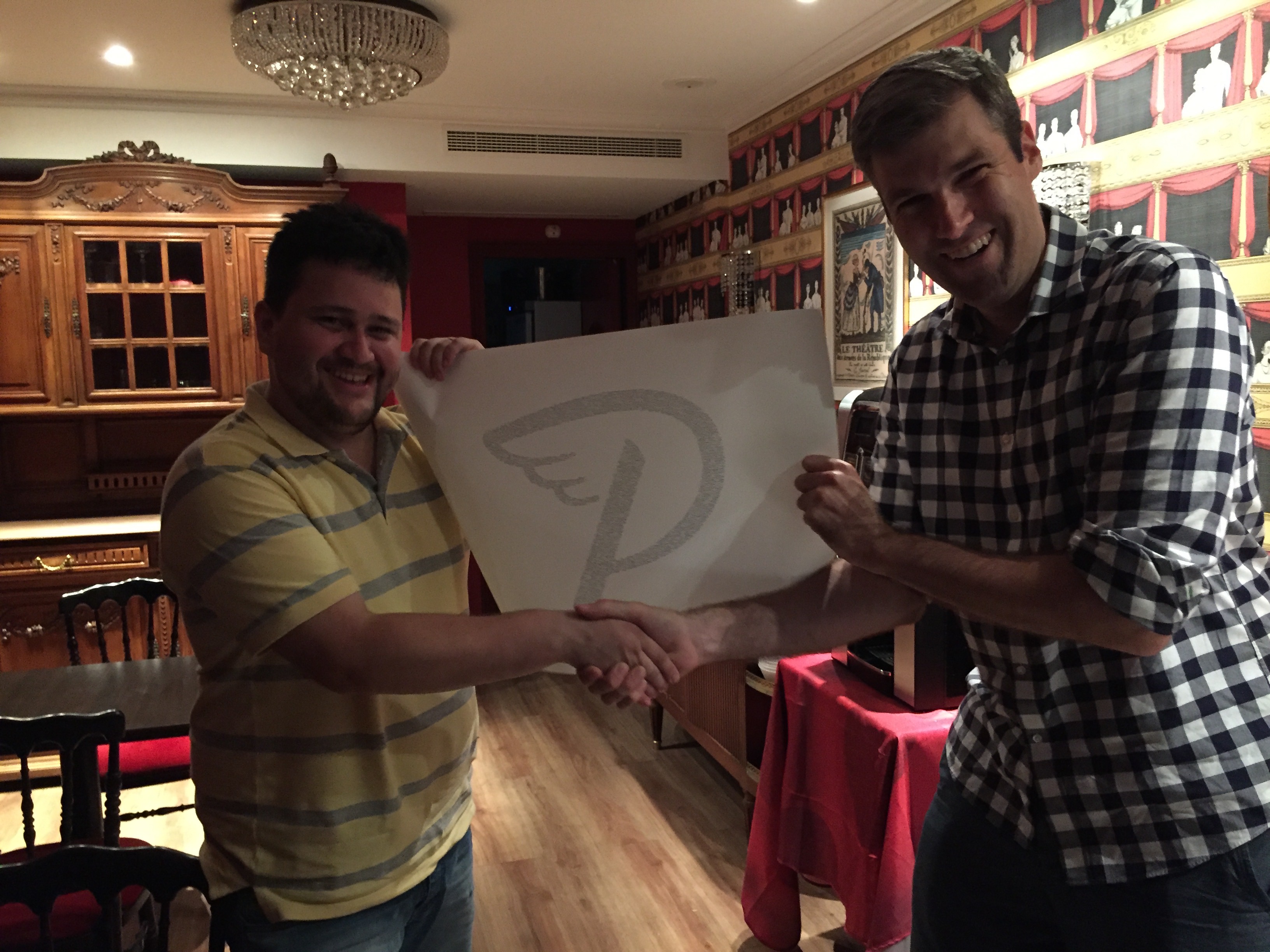 This just might have been the best meetup ever, benefiting from a city full of beauty and art and history, the surprisingly positive and optimistic buzz of Paris, being amongst some of the smartest people in our field, AND getting to really know, appreciate, and genuinely like the people we work with.

I think all our peeps came away with a stronger sense of being a team, which is especially precious when working with a distributed, remote company. We also strengthened the sense of working together on the Prospress “experiment”, while still managing to get sore abs from laughing so much (a key indicator of the meetup’s success for Brent).

When asked about their favourite part of the meetup, the team’s responses were very positive regarding our “team talks”. It was so valuable to hear from everyone about their little corner of Prospress; from the logger (Tricorder), to Robot Ninja, to Subscriptions, and support.

We managed to inspire and amaze each other with what we are working on, were fired up by the talks at WCEU, and saw firsthand how WordCampers responded positively to Robot Ninja. We enjoyed evenings of ideas and exchanges amongst bright minds and we were inspired and amazed by the city itself. Who needs the 1920s? (Pros)paris 2017 was pretty darn sweet.

And if you can see yourself at our next Prospress meetup, we are hiring! Check out our open positions here.