In China, eCommerce is a Lifestyle

“In other countries eCommerce is a way to shop, in China it is a lifestyle.” – Jack Ma, founder of Alibaba

With the excitement building for Alibaba’s Initial Public Offering (IPO) tomorrow (it’s expected to be the largest IPO in US history), I thought it might be time to start developing a better understanding of the world’s fastest growing eCommerce market.

According to this excellent resource from the Wall Street Journal (seriously, check it out), China’s eCommerce market is estimated to be worth $713 billion by 2017. 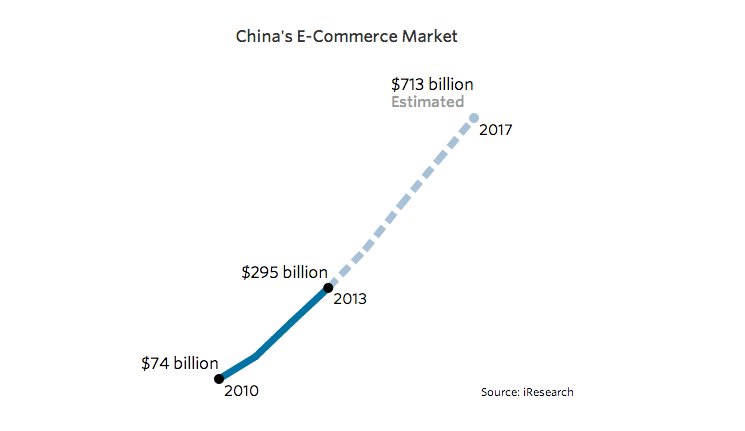 By 2020 China’s eCommerce market is expected to be larger than those of the US, Britain, Japan, Germany and France combined.

80% of the online shopping market in China is dominated by Alibaba. Alibaba owns three main sites: Taobao, a Consumer to Consumer (C2C) site; Tmall, a Business to Consumer (B2C) site; and Alibaba.com, a wholesale trade platform.

But while Alibaba has an enormous market share, the eCommerce market in China is still large enough to sustain competitors and niche players, according to KPMG.

And, as reported in Time, less than half of China’s households are currently online, and consumer spending comprises only around one third of its economic activity (compared with two thirds in the U.S.).

So future growth [for Alibaba] will be attained by making sure that it continues to control a large swath of the Chinese market as more and more consumers get online and as consumer spending there becomes a bigger and bigger part of the country’s larger economy.

In other words, eCommerce in China is just doing its warm up stretches.

Chinese consumers are enthusiastic adopters of social commerce. They use resources like Tencent’s We Chat and Sina Weibo (China’s leading microblogging platform, similar to Twitter) to obtain advice from friends about whether or not they should buy.

Chinese consumers also use social platforms to seek advice from opinion leaders and to post and read product reviews. In fact, 40% of China’s online shoppers post and read reviews, which is more than double the percentage in the US.

Chinese consumers are also strongly in favour of mobile commerce. For example, according to KPMG , 55% of China’s internet users have made a mobile payment (versus only 19% in the US). China also has the largest number of mobile-based eCommerce transactions out of any country. 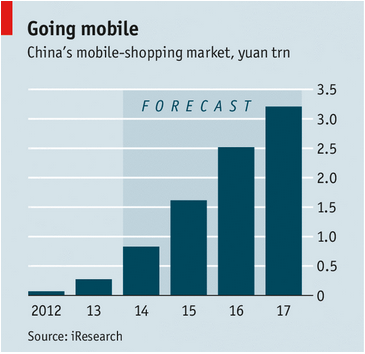 Of course, China is a huge country and there is diversity across cities with different levels of wealth. Overall though, common purchases in China’s eCommerce market are fashion items and accessories.

In China, most purchases are discussed via telephone, email or chat prior to purchase being made. It’s not uncommon for negotiations and modifications to be made during this pre-order stage.

Unlike in the US, Chinese retailers rarely allow returns. Consumers are wary of prevalent counterfeit goods, and will often expect the lowest priced items to be counterfeit.

According to Taobao, the busiest time for mobile shopping is 10pm.

Express delivery, which is called “kuai di” in China is available for 5-6 renminbi (<US$1) and is payable in cash for same day delivery. It is often cheaper and easier for Chinese consumers to purchase something online with kuai di delivery than it is for them to go to the store.

November 11 (or 11/11) is China’s Singles Day, China’s equivalent to Cyber Monday. In 2013, Singles Day online sales rose 80% on the previous year to US$5.7 billion, which was more than triple the amount of 2012 Cyber Monday revenues in the US.

Even if sellers don’t plan to enter the Chinese market—it wouldn’t be easy, and requires a deep level of understanding of both the market and the consumers—I think we’ll increasingly have a lot to learn from eCommerce innovators in the Middle Kingdom. Particularly when it comes to mobile commerce.

One response to In China, eCommerce is a Lifestyle